Recent blogs have discussed the advancement in technologies that make it potentially easier to have connected supply chains. However, the lack of enthusiasm by enterprises and application software suppliers for this to happen requires supply chain professionals to focus in the near term on improving their core supply chains.

An area for possible improvement is the implementation or  upgrade of IT hardware and applications that link and potentially integrate commercial and control systems in warehouses and factories.

Supervisory Control and Data Analysis (SCADA) systems have been a feature in capital intensive industries (e.g. oil and chemicals, paper, metals) for decades, but these systems were kept separate from the commercial systems for two reasons:

SCADA is a general term that describes a system used to manage the operational assets in an enterprise. The configuration of a SCADA system consists of hardware and software, plus sub-systems to control industrial processes, both locally or across many locations. It monitors, collects and processes data in real-time, through interfaces with devices, such as sensors, motors, drives, pumps and load cells and provides visualisation, alarm and reporting tools. 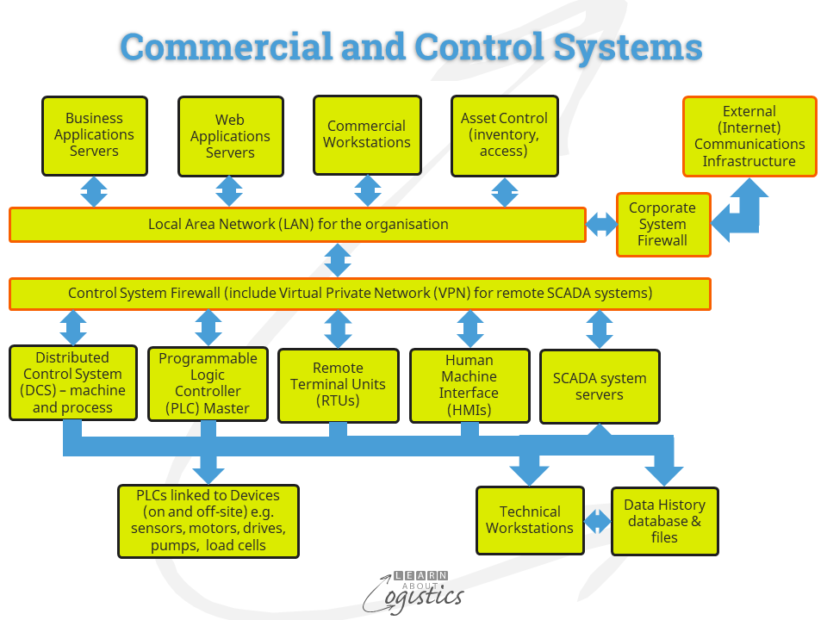 The diagram illustrates four technology groups within a SCADA system:

Group 1:  Sub-sets of a SCADA system – Distributed Control System (DCS) for machines or processes; Programmable Logic Controller (PLC) master; Remote Terminal Units (RTU) and Human Machine Interface (HMI), which assist operators to process data or control equipment status. An HMI could be a control board or tablet, showing schematics of the process and equipment, location information, photos, illustrations and text. Additional sub-sets in Group 1 include instruments and IT telecom and/or wiring infrastructure.

Group 4: Security against cyber attacks. A firewall as a security buffer between the SCADA network and the Corporate network or Internet. It includes a Virtual Private Network (VPN) for remote SCADA systems. Also, an authentication process in the software to identify authorised users for access to the SCADA system. Depending on the perceived risk of cyber attack on the SCADA system, intrusion detection and off-site redundancy may be appropriate.

The reducing cost of computing, data storage and communications bandwidth has enabled the development of lower cost control systems. Also, SCADA systems can now communicate with both SQL databases and operational equipment, which bridges the old gap between technical and commercial systems. Use of the SQL database language has been a core enabler in porting the various data packets to the correct system addresses, resident on a network (local area network – LAN or wide area network – WAN).

These technology developments have made viable the large distribution centres designed for replenishing retail outlets or servicing eCommerce orders. The common feature of these DCs is picking a defined order from a wide assortment of items, that is ‘assemble to order’ (ATO). Due to the monotonous work routine, automating picking from bins is often the start of linking commercial ordering system and picking control systems in warehouses. Further developments, such as automated guided vehicles (AGV) for transport in the DC depend on the financial justification.

Many articles that discuss new technologies suggest that most enterprises will be fully ‘automated’ within only a few years; combining commercial and control systems. However, the writers appear to have no experienced structuring an IT capital expenditure (CAPEX) submission – not only the hardware and software, but the costs of data conversion and transfer, installation and implementation, training and the inevitable delays.

Attendees and exhibitors at this year’s Internet of Things World (the largest IoT event), held in California were reported being concerned that issues, including total costs, difficulty with legacy systems and scepticism concerning the financial benefits, were deterring many potential users from buying. As an example, in the technically advanced country of Germany, it is reported that only about five percent of potential user organisations have implemented 3D printing (additive manufacturing) technology (which may or may not be integrated with customer ordering systems).

My experience with automation and integration has been in Assemble to Order (ATO) ‘mix and stir’ process based businesses, because process equipment had measurement instruments installed, which helped justification of the system and implementation. Based on discussions and reading articles concerning implementation, I consider that ‘mix and stir’ ATO is currently the most likely production type for projects to integrate commercial and control systems.

Structuring your manufacturing based business as an ATO includes the intention to reduce the value of inventory – no finished goods warehouse; instead the work in progress (WIP) warehouse becomes the Order Penetration Point (OPP) or Order Decoupling Point (ODP). This is where an incoming order meets the capacity plan and production instructions for machines and processes to (potentially automatically) execute the order within a short time-frame.

The success of a SCADA integration project will depend on the quality of initial design, implementation plan and schedules, testing discipline and people collaboration. As Procurement should do the buying and Logistics is likely to be involved in a SCADA systems integration project, potential challenges to be aware of are:

While ATO focused distribution centres will continue to automate,  general warehouses and factories are likely to take many years before being fully automated operations. However, to gain experience, there will be limited size SCADA implementations, integrated with commercial systems and Logisticians must have a coherent approach when this is discussed.

So,although Logisticians are not expected to be IT specialists, there is a need to acquire additional skills to identify and discuss how competitive advantages may be enhanced through the use of technologies.