To identify the resources and time required to address the critical and operational Supply Chain Risks in your organisation, the initial step is to structure the current assortment of uncertainties into an understandable matrix of risks.

The previous blog discussed potential risks within four classifications: external; value network; internal and supply chain processes. Each risk must then be placed into a category, which can then be extended into an action plan. The process is illustrated in the diagram: 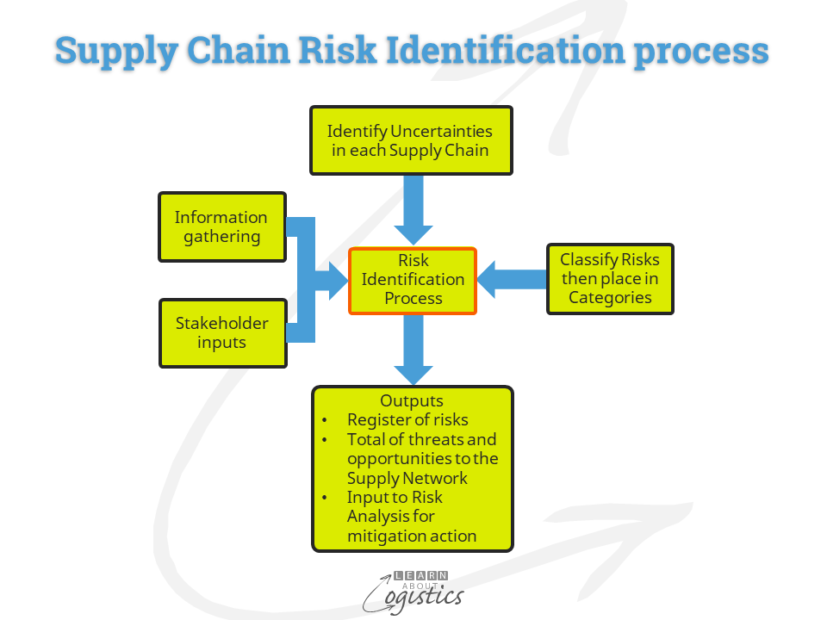 Categories of risk extend from the extremes of certainty (which rarely occurs) through to ignorance. Ignorance infers that you recognise a risk associated with an event, but do nothing to identify the likelihood of occurrence or the possible consequences. This lack of action contains a risk in itself, together with an unknown cost.

Between the two extremes are three categories of risk:

Unknown – unknown risks are recognised as ‘force majeure’ – a French term meaning ‘greater force’, which is used in supply contracts. The objective of the term is to free one or both parties from liability or obligation when an extraordinary event or circumstances occur that is beyond the control of the parties and which stops the contract being fulfilled. It is not intended to protect either party to the contract from negligence.

The term Black Swans was discussed by Nassim Nichollas Taleb in his book The Black Swan – the impact of the highly improbable Penguin, 2008. Taleb states that we cannot predict Black Swan events because they have three characteristics:

The term Black Swan comes from the 17th century belief in the northern hemisphere that all swans were white. If a bird was another colour, it was not a swan. When explorers came to Australia they found true swans that were black. Therefore the known rules had to be changed. In the 21st century, Black Swans are events that change the rules and create a new paradigm.

A Black Swan event is usually seen as a negative, but it can also be positive, such as inventing a new technology. Taleb identifies “…the computer, the Internet and the laser as three technological black swans which came out of nowhere. We didn’t know what they were and when we had them right before our eyes we didn’t know what to do with them. The Internet was not built as something to help people communicate in chat rooms; it was a military application and it evolved”.

However, disruptive technologies are rarely Black Swans. In an industry, established organisations are often so entrenched in the current way of doing things, they cannot envisage a different way of providing the product or service. They ignore, or do not sufficiently investigate, the risks to their business (which is ignorance).

The three categories (known; known-unknown and knowable unknowns) applied to risks identified in the four classifications discussed in the previous blog, provides a 12 segment matrix. Completing this step is a structured process to identify the scope of work (SOW) required to establish the Supply Chain Risk Management Plan.

For each category, the amount and complexity of work increases:

Using the outputs from the risk matrix enables the Supply Chain group to submit a structured proposal for senior management to approve the allocation of resources. Following approval, analysis can commence to develop the Supply Chain Risk Management Plan.