A recent event and risk.

Its not the risks that you know about that are a challenge, but those you do not know. This situation came to the fore recently with regard to Australia’s smallest State, the island of Tasmania.

With a small population and little industry, the State is reliant on imports from the mainland to stock the shops. Exports to other States and internationally are mainly agricultural products, both fresh and processed. Transport is by sea, on two large ‘roll-on, roll-off’ ferries that undertake day and night crossings of Bass Straits.

This reads like a straightforward freight movement scenario – until fifty percent of the transport capacity is removed. It happened when a wind gust (not unexpected) hit one of the ferries in Melbourne; it broke the mooring lines, causing the ship’s ‘roll-on, roll-off’ doors to be damaged. The effect was the same as shutting fifty percent of the only highway between two population centres.

Immediately there were pictures of horticultural product delayed in warehouses and talk of price increases – the consequences of restriction in capacity. But what could be done? There are no instant answers, but the majority of commercial enterprises on the island are reliant on their supply chains, which depend on a critical piece of Logistics infrastructure. Although the timetable says the ships will sail each day, there must be uncertainty concerning whether it will consistently happen.

In a situation of uncertainty about a piece of Logistics infrastructure, the approach should be to identify and know the risks. The difference between uncertainty and risk is that the former is of unpredictable variability (i.e. don’t know) while risk has statistically predictable occurrences. It is hoped that the ferry company has risk management as part of its business analysis; but there are also the exporters and importers who are reliant on the ferries. Establishing a Supply Chains Risk Management (SCRM) approach to understanding their vulnerability and resilience to critical events should be a part of the business strategy. 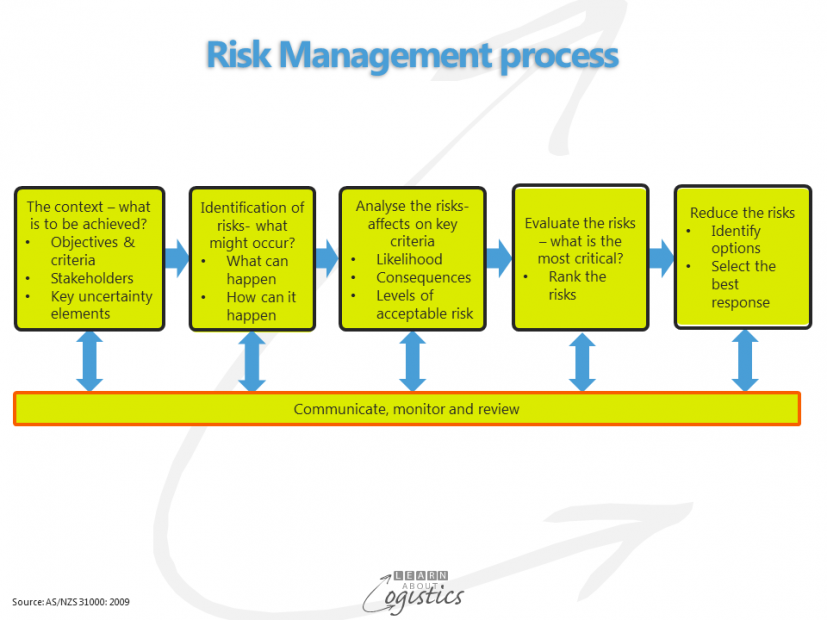 Managing risks is an investment in future events, so it is preferable to anticipate potential problems rather than trying to overcome unexpected challenges after they have occurred. The greatest risk is that an organisation remains in a reactive mode to risk and only responds when something goes wrong. Not investing in processes, techniques and technologies to anticipate threats to the Supply Network is not a good cost saving.

In the worst situation, an organisation can experience increased vulnerability due to multiple events that are not known and for which risk evaluations have not been done. This is currently occurring in Tasmania with the supply of electricity. The drought means that the hydro-electric part of the power network is unable to provide all the power required. As a past risk mitigation investment, a power line was laid between Tasmania and the mainland to ‘top-up’ any shortfall. What is the likelihood of that link failing and in a drought? It happened and will take some months to repair.

So difficulties with power and the only transport link to the mainland have increased the risks for organisations. However, it requires time and effort to identify the information required about events that are not known, but could be – for example the number of days per year (or by season) that the ferries have been unable to operate, for whatever reason. Once the data is obtained, then probabilities can be calculated for the likelihood of a ferry not being available. With the likelihood of the event established, the consequences, usually as lost income, but also customer relations, are identified. Based on the likelihood and consequences of the event and taking account of the organisation’s appetite for risk, management can decide what could be done to mitigate the costs.

An objective of risk management is to avoid being unable to recover from an event by failing too late. So, in geographical areas with limited options, it requires organisations to have Supply Chain strategies that are flexible and dependable.

Flexible organisations have the capability to quickly re-structure so that orders of varying volumes, product mix and delivery requirements can be addressed profitably. This requires a flexible business and organisation structure, integrated with a flexible cost and pricing system.

Dependable means that systems and processes within the organisation must be both predictable and robust. Changes in the wider environment, for example capacity constraints, weather and industrial disputes, can be overcome without affecting customers.

The third element is an early warning indicator that signals when something different from normal could happen. In the situation of ferry movements, automatic signal from the weather bureau concerning winds and rough weather could be considered. With forecasts seven days ahead, it gives time to adjust shipment or receiving dates and quantities.

For your organisation, where are the Logistics infrastructure choke-points? What is the likelihood of something going wrong at that node or link in the Supply Network? What are the consequences? Is the organisation willing to accept the risk or do something to reduce the consequences? There is surely some work to be done – which could be the start of building a Supply Chain Risk Management process.